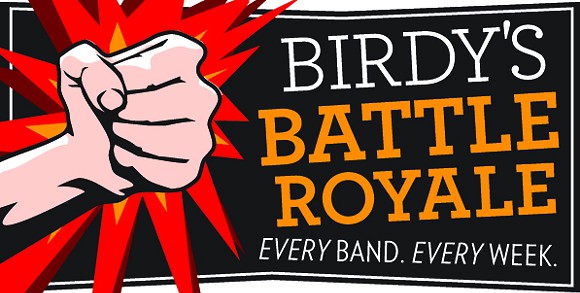 It has been a long time since we’ve played at Birdy’s Live, and the Birdy’s Battle Royale was such a great event to be a part of! The music was so diverse, ranging from alternative metal to folk rock, and from solo acoustic rock to the gasoline soaked mind-scraping havoc of black magic wizards. The 25 minute sets kept the night moving right along, pleasing my ADD very much! It was also a great opportunity to meet so many talented musicians in the area, each one of them kicking ass in their own unique ways.

Jonathan Sanders wrote an article about the event on NUVO’s Website, giving his scoop on every band that played. Here’s what he said about us:

“Dead Birds Adore Us, which finished second, provided the other end of the variety spectrum, pushing progressive rock with a bent toward Zappa-esque mathematical experimentation. They impressed the crowd with a set that wasted no time, sticking to the music for most of their 25 minutes. They consistently kept listeners guessing with their complicated time signatures and riffs which demanded our full attention.” 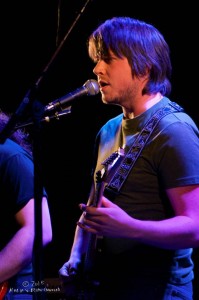 We really appreciate the kind words! It’s nice to be recognized for playing complex music with odd time signatures. Several people complimented our music as being tight and orchestral sounding. With the grungy tone of the guitars, sometimes the intricacies of what we play can go unnoticed. We are happy to see that it isn’t.

Prowlers & the Prey had our vote for the night, and they finished in first place. They are a folk rock band from Broadripple, comprised of active musicians from several different bands in the Indianapolis area. They have only been playing together for a few months, but you wouldn’t be able to tell by their sound. Easily one of our favorite bands in the city now.

So being that we made it in second place, our next round will be on April 24th at Birdy’s Live. We will be there to support Prowlers & the Prey on April 17th. Our next show will be an all acoustic show with Bizarre Noir and Fiber on March 28th, more details to come soon.